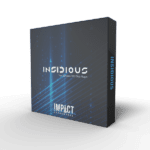 This is the definitive SID chip plugin! With this virtual synth created by Mike Clarke, you can harness the iconic sound of the Commodore 64 in any DAW. Get inspired with 350 sounds by the most famous C64 composers and demoscene musicians, like Chris Huelsbeck, Rob Hubbard, Martin Galway, Jason Page, Mark Knight, and more.

inSIDious has been developed over 5 years by Mike Clarke, a veteran video game musician and programmer, who spent his formative years playing Commodore 64 games and listening to their music. It was this music that set him on his career path, giving him huge respect for and admiration of the SID chip and the sounds that it could produce.

After using SID sounds in many productions over the years, Mike felt that none of the existing VST emulation attempts were anywhere near suitable as a replacement for his HardSID Quattro sound card (containing 4 actual SID chips). So, he took it upon himself to create his own emulation to be as close as possible to the real thing.

As a result, inSIDious is unlike the many 'SID-like' VSTs in existence, which have the basic waveforms and little else. Instead, it is a re-implementation of every feature of the chip as accurately as possible; this includes even 'bugs' and quirks which help give the chip its iconic sound!

The SID chip (and by extension inSIDious) has three independent digital oscillators that generate 4 fundamental waveforms: Pulse, Sawtooth, Triangle, and Noise. The Pulse waveform's width can be set to any one of 4096 positions representing the complete range from pure square to a pulse thin enough to be silent.

The Noise waveform is a digital pseudo-random noise generator that can be pitched up and down and sounds characteristically "8-bit". Together with inSIDious innovative "SFX" button, this can be an amazing tool for creating classic sound effects.

The Pulse, Sawtooth, and Triangle waves can be enabled in any combination, giving rise to a unique set of extra waveforms. Also, any oscillator can be synchronized to the frequency of another to produce a "Hard Sync" effect.

When an oscillator is set to the Triangle waveform (or Tri+Pulse), it can use another oscillator as a carrier frequency to produce ring modulation, which can produce bell-like metallic sounds and effects.

The filter is an analog, multimode resonant filter that can be set to low-pass, band-pass, high-pass, or any combination of the three. The 6580 version includes six curve models as well. For modulation, an envelope and LFO are included. By running Reaktor in FX mode, external audio can be run through this filter!

"If you're looking for authentic analogue SID sound for your DAW, make no mistake - this is the only plugin on the market doing it right. Creating patches for inSIDious was a joyride indeed. If you're familiar with the real SID chip, you'll feel instantly at home with this soft synth. But even if you're not, the user interface is straight forward tidy and user-friendly. However, inSIDious offers more than familiar oldschool flavours, this beast is highly usable for creating all kinds of modern, unusual sounds." LMan (Artist & SID Master)

"I can tell you this is the most accurate-sounding SID software synthesizer you will ever hear... I basically believed I was working with a Commodore 64 via some incredible new graphical interface. InSIDious allows me to create gigantic arrangements in perfect sync." Martin Galway (Composer, Rastan, Wizball, Arkanoid, Comic Bakery (and many more))

“I had a good deal of fun setting up odd patterns using various speeds for the three channels and experimenting with the filter settings. Over 350 presets are included that sound great and cover as wide of a spectrum as is possible with a synth of this caliber....Basically I was having too much fun with it to notice much else.” Rob Mitchell (SoundBytes Magazine)