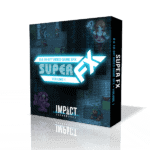 A retro sound designer’s dream, featuring 251 video game sound effects in an 8 and 16-bit style. All sounds crafted lovingly with authentic sources, tools, and techniques. No ‘real’ foley effects! Everything has been designed from scratch to lovingly emulate the charm of legendary games such as Final Fantasy 6, Chrono Trigger, Secret of Mana and other classics of the 90s.

Overview Details Manual
Got a demo that features this product? We'd love to hear it!

As the name suggests, this SFX collection was created to emulate the fascinating, charming aesthetic of video games released in the 8 and 16-bit era. Specifically, we sought the signature sound of games from the late 80s into late 90s, such as role-playing games like Final Fantasy 4 through Final Fantasy 7, Chrono Trigger, Secret of Mana, Final Fantasy Tactics, and similar titles.

The collection began as a private library used in producer Andrew Aversa's fantasy role-playing video game, Tangledeep, which was released on February 1, 2018 with an unmistakable nod to the aesthetics of the Super Nintendo. Using authentic retro sound chips, lo-fi samples, subtractive synthesizers, and vintage processing techniques, I created a wide range of impacts, weapons, chirps, spells, bleeps, and UI noises.

Once Tangledeep was released, and with some wonderful contributions by sound designers 3ee and Dickie Chapin, we expanded the collection to include an even greater variety of just over 250 sounds. With these new additions, it’s suitable not only for medieval fantasy games, but sci-fi, adventure, real-time strategy, and any other titles with that golden pixel-art visual style!