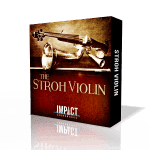 The stroh violin is self-amplified variation on the classic violin design with a resonating metal body and horn. We’ve thoroughly sampled this fascinating instrument with three custom-mapped articulations and a delightful rhythmic sequencer – perfect for adding character to your compositions!

Overview Details Reviews Manual
Got a demo that features this product? We'd love to hear it!

The Stroh Violin is a curious acoustic instrument invented by electrical engineer John Matthias Augustus Stroh, who, of course, named it after himself. Stroh conceived of a violin constructed with a metal resonator and horn, producing a louder, brighter sound compared to a traditional wood violin. He patented his design in 1899.

While this curious modification of the violin never overtook the popularity of perhaps the most classic orchestral instrument, the stroh violin is played by musicians worldwide – particularly in Europe – for folk music. It is beloved for street performance, thanks to its powerful tone that requires no amplification to be heard even in a noisy area.

The Impact Soundworks Stroh Violin captures the titular instrument in a single, elegant, and lightweight Kontakt patch with modern trimmings like a sequencer and 'grit' effects. The result is a fun and surprisingly versatile virtual instrument, great for everything from rhythmic underscore ostinato to comical pizzicato, folk mockups and more. Special thanks to performer Kalle Ricken and designer Richie Albert!

The Stroh Violin includes a fun and powerful rhythmic sequence with three layers: note dynamics, length, and attack offset. Use these to create a wide range of useful pulsing elements for your tracks. On the spiccato and pizzicato articulations, each tempo-synced step will retrigger the played notes, useful for ostinato-type patterns. On the sustain articulation, this sequencer functions as a gate instead, moving the volume up and down.

Articulations can also be mapped and layered using velocity ranges, or soloed via keyswitch - all user assignable. The interface is rounded out with some extra controls, allowing for quick saturation, dirt, and 'vinylization' for an even more lo-fi sound!

"This is, like, a really viable library; you can create some pretty cool music with this…this is an instrument that’s so good, it really is quite fun to play…this library gets a freakin’ ten out of ten; this is an amazing free thing…I can’t even believe this, like…just wow." Composing Gloves (07/16)

“It sounds really good for what it does, but it’s limited….but again, you’re not really getting this plug-in for something to be versatile; this is just to get an interesting sound....definitely check this out; this thing is really cool.” Soul Muzic Productions (06/2020)