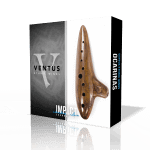 We are pleased to present to you the most deeply-sampled trio of ocarinas ever released – a Costa Rican Pendant Ocarina, a Triple Ocarina and a Chinese Xun – the fifth entry into our Ventus series of solo woodwind instruments from around the world.