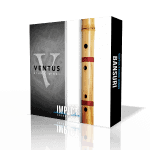 The bansuri is an ancient flute indigenous to India, known as the nadi or tunava in some texts. It has a special role in North Indian and Hindustani classical music and is often known as the "divine instrument", carrying with it the appropriate religious significance. Unlike many ancient flutes, the bansuri is tranverse (side-blown).

We selected the bansuri for the Ventus Series because of its supreme importance in traditional Indian music, and because we loved its haunting, low tone. It is the perfect companion for our Sitar Nation library.

Our bansuri library is performed by Josh Plotner, who captured all key articulations and playing techniques of the instrument: sustains, ornaments, staccatos, legato, portamento, bends, phrases and much more!

"When I started working with the Bansuri, I immediately took note of the realistic haunting and breathy sound of the sampled Bansuri. This is as authentic a playing experience as you can get unless you play the real thing...The Ventus Bansuri is clearly at home in traditional Indian music but would also be a suitable tool for film scores that call [for] an Indian theme or it could even be used as a voice in ambient and meditational music." Brian Brylow (Sample Library Review)

"This is a rather refreshing item on Impact Soundworks’ catalogue of instruments and it gives a rather new and fresh approach to ethnic woodwinds. It doesn’t do much, because it is a single specific instrument, but for what it does, it does it in an amazing way. The greatest thing about it is that it is very affordable!" Nikola Jeremic (The Audio Spotlight)