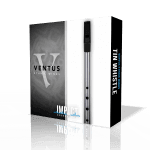 The tin whistle - or feadóg (Gaelic) - is a humble yet versatile recorder-like instrument that is firmly established as a mainstay of traditional Celtic music. Though this instrument family is among the most ancient on Earth, the tin whistle itself found its popularity in the 19th century within the United Kingdom in particular.

We chose this instrument not just for its cultural significance, but also its pure tone and incredible versatility. It can perform soaring, agile parts with gorgeous rapid ornamentation as well as slow, emotional lines that tug at your heartstrings. This flexibility has led the tin whistle to prominence in film, TV & game scoring as well, most notably in Howard Shore's score to the Lord of the Rings film trilogy.

Our tin whistle library is performed by Josh Plotner, who captured all key articulations and playing techniques of the instrument: sustains, strikes, cuts, crans, rolls, legato, portamento, bends, phrases and much more!