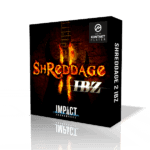 Prepare for an injection of liquid metal! Shreddage 2 IBZ features the ultra aggressive sound of a legendary 7-string heavy metal guitar paired with our most powerful KONTAKT engine yet.

Don’t own Shreddage 2? Get the STANDALONE version!

Shreddage 2 IBZ was conceived after we received countless requests to sample different guitars in the Shreddage engine. We heard you loud and clear, but we’ve gone a step further - not only is IBZ an entirely new instrument in terms of the guitar and samples, but the engine has been rebuilt from the ground up as well!

First, the guitar: a Japanese classic that is perhaps the most popular hard rock & metal axe ever created. It has a bright, biting and aggressive tone emphasizing the pick and attack of each note, compared with the much darker sound of Shreddage II. All crucial articulations were sampled, from sustains, power chords, mutes (up to 6 layers) and tremolo, to pinch & normal harmonics, slides, scrapes, hammer-on/pull-off and more. As with Shreddage II, everything has lots of variations, down/upstroke samples, and recordings of the same note across multiple strings for maximum realism.

You can read more about the engine & interface further down on this page, but in short, it takes the best elements of Shreddage II and expands on them. For example, the instrument can be even more deeply customized to your liking, and the fretboard behavior is more realistic than ever. There’s also an all-new custom FX stack with an amp and cab built right in.

We know Shreddage 2 IBZ will be a powerful tool in your arsenal. Combined with Shreddage II, Drums, and Bass,no face will go un-melted.

Shreddage 2 IBZ includes an all-new, custom script engine created as an evolution of Shreddage II. As you’ll see on the Perform page below, we’ve done away with a separate Fretboard page - now, all your essential performance controls and views are in the same place.

All controls can now be MIDI learned, even vibrato and unison bending, or controlled with the mouse. The fretboard engine has been much-improved with new views to easily see which strings and frets are in use. Clicking Advanced allows control of the fretboard engine, displaying controls such as fret preference, hand size, picking style, and more. Every articulation can be assigned to trigger via keyswitch, velocity, or MIDI CC - even power chords (and power mutes/staccatos)! Along with other useful tweaking options, you can set up virtually any performance or sequencing setup you’d like. Delve deeper into IBZ with controls for extra noises, velocity curve, MIDI guitar support (“Split MIDI Channels”) and other options that can dramatically enhance the realism of your virtual guitar parts! Our new custom FX rack includes a tube screamer-style distortion pedal, three EQs, two amps, a compressor, delay, stereo widener, and of course a selection of excellent cabinet impulses for maximum tone flexibility. Naturally, we’ve also created a selection of FX rack presets to get your inspiration flowing!

Lastly, for advanced users and hardcore tweakers, we created a new “Advanced” settings tab where you can really go deep into the instrument engine. Here you can change things like portamento crossfades and separate down/upstroke pick offsets, palm mute layers, and anti-repetition settings.

"The first word Impact Soundworks use when listing the key features on their page is “brutal”, but I’d say “versatile” is the best word to describe Shreddage 2 IBZ. Though metal was the goal and its not a guitar for every application, Shreddage 2 IBZ is a great and very detailed library suitable for any music where being heavy-handed and aggressive is better than being smooth." D Smolken (Bedroom Producers Blog)

"I had a blast getting to know Shreddage 2 IBZ... It's priced very low for what you get giving you the ability to create dead-on realistic heavy guitar parts! ... It’s been years since my guitar chops were good enough for a face-melting metal solo but with the extensive deep sampling and attention to controls [IBZ] has me pumping my devil horns into the air and believing every note of my programmed guitar parts were real. With a beautifully sampled tone and ease of use [...] any composer with some MIDI chops can shred as a metal god." Don Bodin (Sample Library Review)