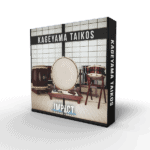 The power and presence of Japanese drums, recorded with a focus on authenticity and versatility. Kageyama Taikos shines in traditional music and epic orchestral works, but it’s equally at home wherever your imagination takes it: pop and rock, jazz fusion, tense underscores, and anywhere else you need expressive, nuanced performance. Featuring master percussionist Isaku Kageyama on eight distinct solo instruments.

Taikos have been an essential part of traditional Japanese music for thousands of years. Their deep, resonant, yet crisp sound is unmistakable, whether played solo or as part of a massive ensemble. In the last century, their prominence has risen far beyond the borders of Japan, appearing in major film & television scores, video game soundtracks, and international events. We wanted to devote a sample library entirely to taiko, with several accompanying percussive instruments, played by a master to open up as many options for inspiration as possible.

We brought these drums out of the more common ensemble or concert hall setting, focusing instead on an intimate studio sound. These detailed, up-close recordings result in a much more versatile sample library, allowing you to use it in any style of music you can imagine. We’ve recorded every drum in this set in great depth, spanning many articulations, dynamics, and variations.

Award-winning performer, instructor, and recording artist Isaku Kageyama has had a storied career. He’s been heard in concert halls like Carnegie Hall, on video game soundtracks like Ghost of Tsushima, and on TV shows, music tours, and artist residencies. We’re honored to bring his masterful playing to artists and composers around the world.

Console is a fully-featured mixer, modular effects rack, and pedal board, designed to give you full control over your mix. Effects include multiple EQs (digital and analog-style), compressors, spatial FX, modulation FX, amps, distortion pedals, reverbs, and more.

Each mic channel can be loaded with up to 8 FX in any order, plus another 8 slots on the master channel, with support for send routing as well. The new "Galois Reverb" added in Kontakt 6 Player sounds fantastic as an alternative to our included custom IRs.

"As a working composer, for $99, this is an absolute bargain. It’s not massive, huge taikos and that’s all it can do; yes, as I say, you can layer all of these and use the ten velocity layers to create really big ensembles if you want to, but you have the option of going really really small, really delicate, really intricate. And that is what I love about this instrument. So for me, if you’re looking for some world percussion, and taikos in particular, played by a world-renowned percussionist, this is a fantastic purchase." Sample Library Review (12/21)