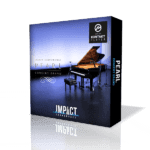 "I was enjoying the simple act of playing it so much I almost forgot to test all of its features. There are many ways to customize its sound on your own, but I like that Impact Soundworks have crafted many presets, touch responses, mic positions for me to use. My 88 key Yamaha keyboard with GHS (Graded Hammer Standard) weighted action, together with Pearl, is the perfect combo for grand piano playing and recording." (4.5/5) Franto Kormanak (Film and Game Composers)

“It’s really interesting how different libraries can fit into different roles, and I’m just loving the way that Pearl just really has such a presence, and it kind of cuts through...it can be really bright, and then it can just be really nice and big and intimate and full, which I really, really appreciate about this library.” Simeon Amburgey (07/2020)

"There is a lot of that sound in Pearl that I have been looking for in a piano library. Mainly the fact that it doesn’t sound boomy and doesn’t have the same annoying frequencies constantly bugging me that have been annoying me with some other libraries. This is a very difficult thing to review though as it is a very subjective matter. For me this piano library is a very welcomed addition because it makes my job easier when I don’t have to fool around with the EQ constantly anymore." (4.4/5) Jarkko Hietanen (The Audio Spotlight)